The Morris Minor was probably conceived over the winter of 1927/28. A very short gestation period followed compared to the standards of today, but by May 1928 prototype vehicles had been spotted and articles began to appear in the motoring press.  Reference was made to the coming of a Morris Calf in deference to the new cars size and its pedigree. It had been designed as a 7 H.P. car with a 747cc engine but was updated at the 11th hour being ‘given’ another 100cc, resulting in an additional single unit of horsepower.

When launched in September 1928, it competed head on with the Austin Seven. This was the car that had created a new market niche and had proven to be very popular with its target market; the newly prosperous lower middle class. The Austin Seven went on to top the sales charts for all models produced in the U.K. during the 1920’s.

The Morris Minor was launched to much critical acclaim at the London Motor Show, Olympia in October1928. There were just two models available in its first year (the 1929 season); these being the Fabric Saloon and the four seat Tourer. It was advertised as a proper scaled down large car, a side swipe at the Seven, which was constructed on a dainty triangular chassis and was un-conventionally sprung. Much was also made of the Minor’s technically advanced engine, a full 100cc larger than the Seven, which also sported an overhead camshaft, a feature to be found on racing cars of the period and on much more expensive and prestigious cars of the day. The Seven had a conventional (and much easier to maintain) side valve unit.

While not the huge initial success that William Morris had hoped for, the car undoubtedly claimed many Austin Seven sales. However It also suffered a number of teething problems with its complex engine, not least of which was oil loss from the camshaft drive housing at the front of the cylinder head. Being positioned immediately behind the fan, the engine compartment was liberally sprayed with oil, ensuring there was very little risk of corrosion at this end of the car!

Another weakness was found to be the output from the dynamo, which was ‘beefed’ up for the 1930 and subsequent seasons. It was also for the 1930 model season that a Coachbuilt Saloon was introduced. This was a steel skinned car with a part folding sun roof, which was produced alongside the cheaper Fabric Saloon model and a lightly updated Tourer.

Sales of all models remained healthy throughout 1930, despite the Wall Street Crash in October 1929, although the worst effects of the depression were not felt until 1932; by which time the Minor had changed radically, of which more later.

The big change for the 1931 season was the introduction of a two seater model to the range, this to sit alongside the lightly updated three existing models. This new variant was named the Semi-Sports but had little to support the claim its name suggested. It retained the same engine, gearbox and rear axle ratio as the three existing models, but it did have a pretty Gordon England designed fabric, boat tailed, body and a full length bench seat. Any increase in performance came from the decrease in body weight over the other models. In any case, the first MG Midget later known as the M Type was still flying the sporting flag for William Morris, and more profit was to be derived from that model. It would not ‘do’ for the Semi-Sports to take sales away from that car – although it undoubtably did! Just 744 of this model were made before production terminated eleven months after the first one rolled off the assembly lines.

The most significant event in the six year model life of the Morris Minor occurred in late December 1930. It was at this time that Sir William Morris unveiled the first new car to sell at a price level of £100. All previous full size cars sold in the U.K. up-to that time had all cost in excess of that figure. The One Hundred Pound Minor (as it became unofficially known) was in fact a two seat touring model, once again built upon a very slightly modified standard Minor chassis but without many of the embellishments of the earlier cars. Gone was the chrome radiator surround to be replaced by a black painted article. The cars were not fitted with side lights, these being incorporated into the main headlamp shell, and neither were bumpers, which had appeared on all models up to that time.

The major change to the car occurred out of site and under the bonnet. Here the complex, and costly to maintain, overhead camshaft engine was replaced by an identically sized (847cc) side valve unit, which was significantly cheaper to produce, although performance from the two engines was very similar. The two-seater  was joined (some seven weeks later) by similar economy model Coachbuilt and Fabric saloons and finally a four seat Tourer model arrived in March. The existing ‘non economy’ overhead camshaft model range continued unchanged until they were finally withdrawn at the end of July 1931. During this short period Morris offered the public a huge choice of eight Minor models, excluding the commercial variants.

The model range was obviously too large and the existing overhead cam engine cars were dropped for the 1932 season. The overhead cam engine however did not die with the demise of these models as it was chosen to be the powerplant  in two brand new models, the Family Eight Saloon and the Eight Sports Coupe.

Both of these models had the benefit of an extended (or long wheel base) chassis. They were also fitted with the Lockheed hydraulic braking system which replaced the cable operated brakes fitted to all earlier cars. The Family Eight also benefited from the addition of two more doors, making it the first and only four door model. It was also a very heavy and cumbersome car when fully loaded, the 847 cc engine failing to produce anything like a sparkling performance! Chrome embellishments were also now back in favour. The very recently introduced economy models also received a significant make over, with hydraulic brakes being fitted and the removal of the scuttle fuel tank to a much safer position at the rear of the car. A new chrome radiator surround was also introduced on all models, and by common consent was considered to be the ‘prettiest’ in the cars life. The Fabric Saloon was dropped from the range at the end of the 1931 season but the four seat tourer had now been fitted with a side valve engine and continued through to the end – the only model to have survived in continuous production from the start in the late summer of 1928.

The 1933 season saw further rationalisation as the recession really hit home. Whilst all models continued with further updating, the previously OHC ‘engined’ Family Eight and Sports Coupe models (confusingly re-named ‘Minor Family Eight’ and ‘Minor Special Coupe’)  were now fitted with the all pervading side valve unit, while a four speed crash gearbox became a standard fitment on all but the £100 car. Amazingly the previously fitted Lockheed hydraulic braking system was dropped from the long wheel base range of cars, which reverted to the 1932 season cable set up!

The cars were given a final and major make-over for the 1934 season for what turned out to be their last year in production.  The two seater and four seat tourer received a new rear end treatment and yet another design of radiator surround was fitted to all models, the cars finally losing their ‘vintage’ look. A new wing design, leather upholstery, smaller 18″ wheels and Lockheed hydraulic brakes were fitted across the range and a part synchromesh four speed gearbox became another standard fitment. The bad news for the Minor was that Morris was about to unleash the new Morris Eight at the 1934 Motor Show. This car was built to compete with (and looked very similar to) the 1932 introduced Ford 8. Both cars proved to be huge successes. And so in the summer of 1934 the Minor ‘passed away’; born to fight the might of Herbert Austin, it ‘died’ as a result of competition from Henry Ford. Gone but certainly not forgotten. 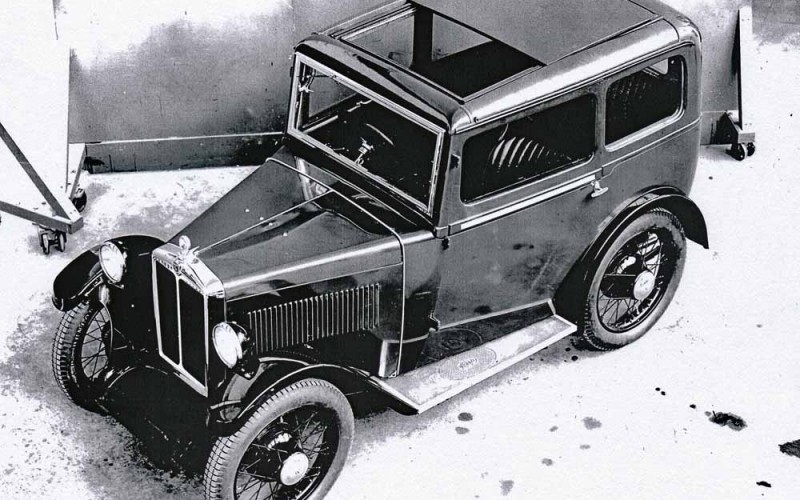 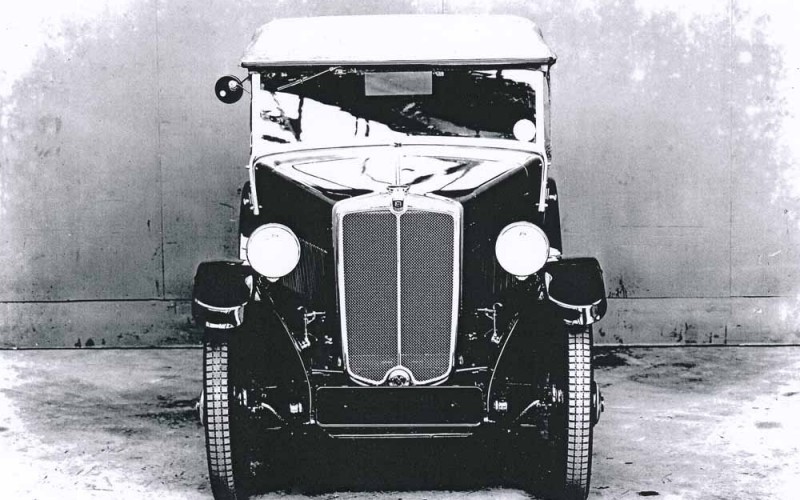 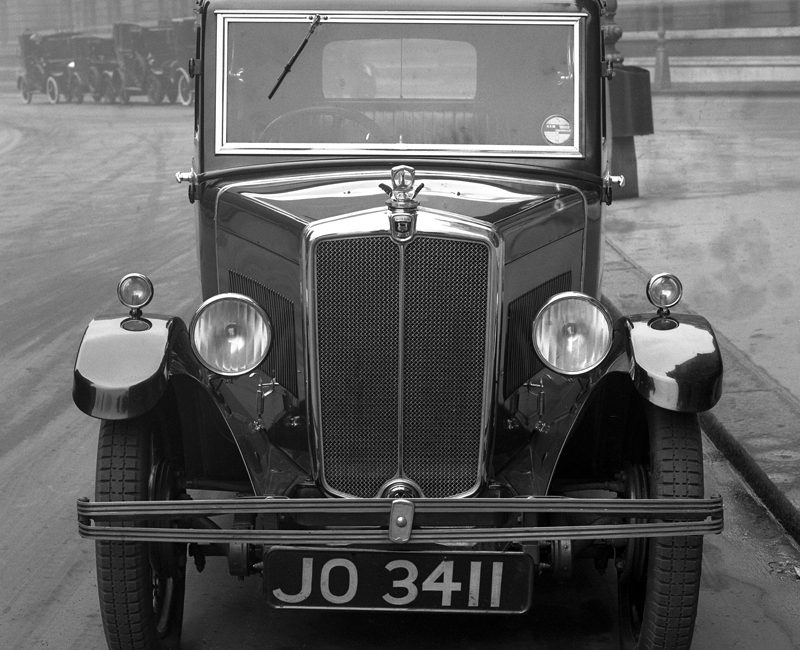 1933 Season
Model range unchanged except for Family Eight and Special (name change from Sports) Coupe models, which were now powered by the side valve engine.

Click on the button to open a table detailing Morris Minor colour schemes from the commencement of the1929 season to the end of production in July 1934.

The pre-war Morris Minor featured in many articles in the automotive magazines of the day. Here are are just some of them. Eventually it is planned to make available many more such items through these pages. (A special ‘thank you’ to those who have provided scans of some of these period articles. (Ken Martin, Tony Gamble, Sam Christie & Jeremy Evans)

Morris Motors published their brochures on 1st September each year. Within their pages were contained the detailed descriptions and specifications for the following calendar year’s cars. The 1929 model year Morris Minor therefore made its first appearance in the Morris Motors range brochure dated 1st September 1928. In addition to the range brochures Morris also published other leaflets from time to time. Below are examples of both types of documents. More will be added as they become available. (The 1931 S.V. Brochure scans were provided by Tony Gamble – with thanks.)

During the late twenties and early thirties Morris Motors pricing changed to reflect the deepening effects of a world wide slump in trade. Less money circulating in the economy meant that too many manufacturers were chasing too few customers. As a result many car companies went to ‘the wall’, while the remaining manufacturers slashed their model line ups and reduced prices. The £100 Minor epitomised the period in which it was created.

The Minor within the Morris Range

In the twenties and thirties the September editions of the Morris Owner magazine all carried a feature article on the following season’s range of cars. The only exception found was for 1928,  when upon its launch the Minor was featured quite separately to the remainder of the range. The PDFs below illustrate clearly how the Minor fitted neatly into the the ever growing Morris range and also how it incorporated the advances in technical devolopment  and automotive fashion during this period. Special thanks are due to Ken Martin for his help with this feature.

The Minor in the Morris Range